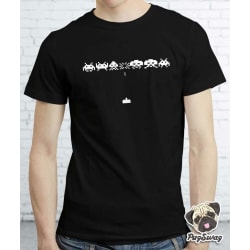 The 20ish-year gap between these popularity spikes is not a coincidence, as it roughly corresponds to the time between generations. Following that pattern, you better start stocking up on your Space Invaders iconography now because the 2020s, and the next ripple in popularity, is nearly upon us!

Before you start panicking (because you totally should!!!), this giveaway can help you get your collection started and past sponsor Comet Culture can help get you the rest of the way.

Prizemojo has received up to 449 karma for delivering the prize!

Tasty candy flavors but without all that sugar

It's cold out, here's a jacket

A sampling of random scents for one random winner

A super power for your super story

Identifying and embracing a cat-atosis diagnosis