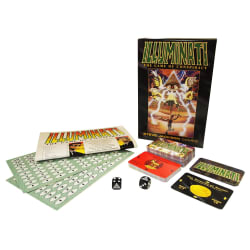 Giveaway: Play the Illuminati (Don't be Played by them) (Delivered)

I've selected this because some say this game includes hits about the NWO agenda. I figured our viewers would appreciate that. Take a look here: PAID FOR BY THE CIA AND THE ROTHSCHILD ILLUMINATI

Even though the Illuminati like to play the masses like pawns on a chessboard, you're not a pawn. So why don't you play Illuminati instead?

This classic by Steve Jackson games first came out in 1982 (that's just two years before 1984).

It's not a laughing matter. Good luck!

Prize: Illuminati the Game of Conspiracy [File Under: Board Games]

The telephone company is controlled by creatures from outer space. The Congressional Wives have taken over the Pentagon. Evil geniuses are building Orbital Mind Control Lasers . . . aimed at YOU! This is a tense but tongue-in-cheek game about taking over the world, not by guns and missiles, but by stealth and guile. Each player becomes one of the Illuminati, the "secret masters" who are behind everything! Build your power and wealth, taking control of groups like the FBI, the Federal Reserve, the Nuclear Power Companies, the Orbital Mind Control Lasers, the Semiconscious Liberation Army, the Post Office . . . yes, even the Post Office is part of the Conspiracy .

Only Ambiance Youtube has received up to 2429 karma for delivering the prize!

Are you a fan of white noise?

Take it Easy in a New Hammock

An Emergency Radio - Don't be Home Without It