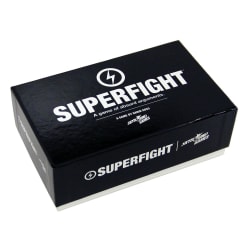 There are a number of problems with most super fights...

If these are frustrations you encounter in your own super fights, you should probably talk to your doctor and... maybe the police. Perhaps a psychiatrist. In the meantime you can also try winning a copy of this SUPERFIGHT card game! Lots of well-timed, high-energy, low-sweat, fun with friends and 100% on us (Wanderlink).

Wanderlink has received up to 1365 karma for delivering the prize!