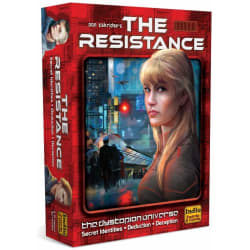 Giveaway: Can you resit "The Resistance"? (Forfeit)

Are you a former government spy or resistance fighter, now retired, who has been looking for just the right spy/counterspy game to make your haunting memories seem a little less real? Yes? Then we have just the game for you!! In "The Resistance" a team of fighters are set against a powerful and corrupt government, fighting for the freedom of their fellow countryman. The catch is there are pro-regime spies and saboteurs in there midst and they must be uncovered if liberation is to succeed. Sound familiar? Well the nice thing about this version of "the game" is that there actually are do overs (every 30min in fact) and no actual lives lost. Your therapist would approve.

Or... less likely, you just really like Mafia/Wearwolf type games. In that case I suppose this game would be an excellent choice for you as well.

The Resistance pits a small group of resistance fighters against a powerful and corrupt government. The resistance has launched a series of bold and daring missions to bring the government to its knees. Unfortunately spies have infiltrated the resistance ranks, ready to sabotage the carefully crafted plans. Even a single spy can take down a resistance mission team, choose your teams carefully or forever lose your chance for freedom. The Resistance artfully balances pure deduction elements with the social elements into a game that creates the adrenaline filled moments of high stakes pokerin a full interactive and social event.

Giveaway Status: Prize Forfeit: The winner did not claim the prize (by providing their delivery information) within 2 weeks.