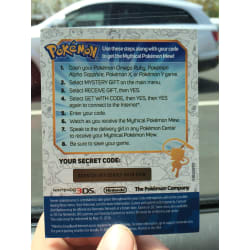 Due to the popularity of the first one, and the fact that the codes are soon due to expire, I thought it best to do a second giveaway!

Did you miss your last chance? Well here's a second.

The winner will receive a mint download card for the lv 100 Mew via normal USPS mail [snail mail], inside it will be some cardboard pieces so the post man doesn't accidentally crease it."

Jaidonkaia has received up to 168 karma for delivering the prize!